Posted on February 8, 2013 by echoesoftheozarks 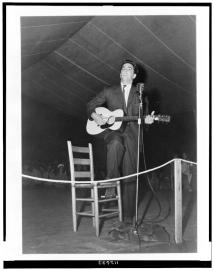 Folklorist Alan Lomax plays his guitar at a music festival in Asheville, North Carolina, sometime between 1938 and 1950.

From the 1930s to 1990s, folklorist Alan Lomax traveled around North American as well as the globe to capture musical sounds of the region. Arkansas musicians, including those from the Ozarks, were included in the recordings. Many of the recordings can be found online, and a great place to start is with the Association of Cultural Equity, which has a searchable page devoted to the Lomax Recordings here. The search engine allows you to type in words like “Arkansas”(a good place to start) and, from there, you can hear Almeda Riddle of Greers Ferry sing the hauntingly beautiful “Bury Me Beneath the Willow” or Neal Morris (Jimmy  Driftwood’s father) croon “The Ballad of Jesse James.” Interviews with the musicians are also featured. And though it’s not in the Ozarks, don’t pass up the blues recordings from Forrest City.