Rockin’ in the Ozarks Before it Was Called Rock ‘n’ Roll

Posted on February 14, 2013 by echoesoftheozarks

Though wasn’t called rock ‘n’ roll then, the Ozarks heard plenty of it in the late 1940s and early 1950s, especially when Johnnie Lee Wills came to town. The musician, brother of Bob Wills of Texas Playboys fame, routinely left his home base of Tulsa, Oklahoma, to play throughout Northwest Arkansas at VFW and Legion halls — Lincoln and Huntsville were among the towns — not to mention the occasional fraternity dance at the University of Arkansas in Fayetteville. 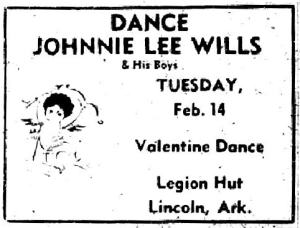 1956 ad for Johnnie Lee Wills, who performed in the Arkansas Ozarks on a regular basis.

Johnnie Lee performed in his brother’s band before they parted ways in the 1940s. Remaining band members joined Johnnie Lee to form Johnnie Lee Wills and His Boys, a regular fixture on Tulsa AM radio station KVOO, which undoubtedly could be heard in the Arkansas Ozarks.

Western swing, the style of music performed by both Bob and Johnnie Lee Wills,  morphed into rockabilly, which Johnnie Lee performed before it was called such. (Bill Haley, a more prominently known early rock ‘n’ roller, also began his career by performing Western swing.) In the 1940s, Johnnie Lee was one of the first to record a song attributed to one of the founding cores of rock ‘n’ roll, “Milkcow Blues,” credited to Kokomo Arnold, who recorded it for the Decca record label in 1934. Johnnie Lee always contended he recorded his own version of the song unaware of Arnold’s version. The song later became a rock ‘n’ roll standard through a rendition by a young Elvis Presley retitled “Milk Cow Blues Boogie,” which sounded much more like Johnnie Lee’s version than Kokomo Arnold’s.

Johnnie Lee scored big with his sound in 1950 with his hit song “Rag Mop,” which climbed to No. 2 on the Billboard magazine country chart. A few years later, rock ‘n’ roll would truly come to the area, most notably at the University of Arkansas and its nearby nightclubs. But whether or not people knew it then, Johnnie Lee Wills had already planted the roots of rock ‘n’ roll.