Posted on June 22, 2010 by echoesoftheozarks

The cry offstage was directed at Grandpa Jones during Hee Haw, a homespun – and often surreal – country music variety show that aired on television from 1969 to 1993. It featured corn ball humor, a star-studded cast, a crop of young women in very short shorts and a continuing stream of the best music by Nashville’s most famous. 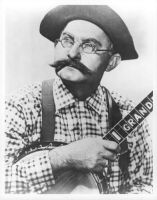 Grandpa Jones, early in his career before moving to the Ozarks.

The supper question was a regular feature of the show, and Jones had a poetic response to the question about all the fine, home-cooking (like rhubarb, collard greens and such) that would be served, to which the audience would respond with, “Yum, yum!”

Over in the Ozark town of Mountain View, from 1980 through the early 1990s, Grandpa Jones dished up food regularly, usually roast beef, cornbread, white beans, greens with cakes made by his wife and performing partner, Ramona. He and Ramona established Grandpa Jones Family Dinner Theatre, a happy place where visitors could hear music performed by the family, Grandpa Jones included, while dining.

Grandpa Jones’ decision to relocate from the hamlet of Goodlettsville outside of Nashville, Tennessee, to the Ozarks, however, was anything but a happy story.

ALL-AMERICAN BOY
It was Hee Haw that catapulted Grandpa Jones’ success though he had always been well known to country music enthusiasts through his banjo-picking and folksy style. Not a mega-star by any means, Jones had only two hit songs in his lifetime: “The All-American Boy” in 1959 and a cover of the Jimmie Rodgers’ signature song, “T For Texas” in 1962.

Jones gained recognition for his old-style banjo performing and yodeling while in his late teens. As the story goes, folk singer Bradley Kincaid referred to Louis Marshall Jones as “grandpa” because of Jones’ grumpy demeanor while trying to adjust to performing on his early morning radio show. Still a young man at the time, Jones adopted the name and wore makeup until he grew into it.

By the 1940s, he recorded with King Records, a powerhouse in country music (then known as “hillbilly”), with songs like “Eight More Miles to Louisville” and “Mountain Dew.” In 1946, he joined the Grand Ole Opry where he was a mainstay.

In the late 1960s, when television variety shows were all the rage, Grandpa Jones was cast for Hee Haw, which also featured a lanky picker named David Akeman who went by the stage name of Stringbean.

Stringbean and Grandpa Jones had a lot in common. Both were born in Kentucky and had a penchant for old-time country music. Both played the banjo with similar comedic styles. The two met and became friends in the 1940s, when they began performing together. They were such good friends that they bought property together in Goodlettsville and were neighbors for many years. Two big time Grand Ole Opry stars lived the simple life in the country.

Stringbean, a product of the Great Depression, had a distrust for banks and stashed his hefty cash at home and carried the rest with him. It was common knowledge in the Nashville country music circles, and many had tried to persuade him to put his money in the bank. News reports said that both Stringbean and his wife had close to $6,000 stashed in their clothing that the suspects overlooked the night they were murdered. 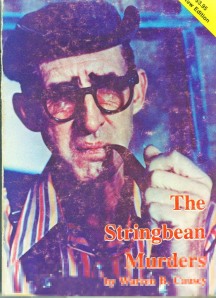 A book about the murders of David (Stringbean) Akeman and his wife Estelle was published two years after their deaths.

Grandpa Jones was devastated. For six years, he continued to live on the property and perform on Hee Haw, though it wasn’t the same without ol’ String. In his autobiography, Everybody’s Grandpa, Grandpa Jones said he never felt a sense of security after Stringbean’s death even though Jones had a big fence and a guard dog. But there was a place that had been on Jones’ mind ever since his early days with King Records when he recorded “Happy Little Home in Arkansas.”

OZARKS BOUND
Grandpa Jones’ brother, Gordon, had been living in Mountain View and Jones was impressed with the town’s dedication to preserving old-time, country music. Mountain View, located in the Ozarks of north central Arkansas, proved to be Jones’ and his wife’s oasis from the busier life of Nashville.

Jones moved to Mountain View in 1979 but continued to keep a place in Nashville for the tapings of Hee Haw. A year later, he and his wife opened a dinner theater in 1980 in Mountain View. His family performed regularly, and Grandpa Jones would join them onstage if he were in town. He fit in well with the community and even became friends with another music legend, Jimmy Driftwood.

In 1993, Hee Haw broadcast for the last time before going into reruns. Five years later, Grandpa Jones died from a series of strokes. He was 84.

Grandpa Jones’ memory lives on. Each year, The Ozark Folk Center in Mountain View features a tribute to Grandpa Jones, which includes Jones’ widow and family performing. This year’s will take place September 3-4.

Though Stringbean and Jones are now gone, Stringbean’s home made the news in 1996 when tenants living there found about $20,000 worth of rotten money behind a brick in the chimney.